The Reign In Spain Stays Mainly in the Brain

[Or Undirected Blog 3, for those who are keeping track]

Romanticism in Spain! That's what captured my interest in the lectures this week. In particular, I found a painting by Francisco Goya, Family of Charles IV, the...for lack of a better word, funniest of the works shown. 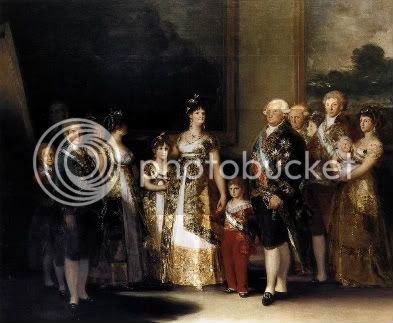 This painting makes fun of the royal family that ruled Spain at the time. Showing a vain and bewildered Charles IV--who looks like a slightly...fuller version of George Washington--and his equally distracted family, Goya didn't try to make them look attractive, or place their heads on the bodies of athletes. The members of the family aren't posed either, with most of the women looking away and one whose face isn't even visible. Goya also placed himself in the painting, behind all the others in the top left hand corner. He separates himself from the useless royals by fading into the darkness in the back. And what did Charles and family do when presented with this painting? They hung it up in their hallway.

Leaders seem to have a habit of hiring the wrong people to present them to the public. Example: George W. Bush. White House Correspondents Dinner. 2006.

Bush hired Stephen Colbert to make a speech at the annual event, probably expecting a performance similar to that of Dana Carvey when former president Bush hired him years earlier. But Bush underestimated Colbert, and got a roast that made a bit too much fun of him, or at least more than Bush expected. Through the speech, the president is clearly annoyed at the comedian, most noticeably when Colbert tells him to "pay no attention to the people who say the glass is half empty, because 32% means it's 2/3 empty"(when speaking of the president's low approval rating). But honestly, when you hire a comedian who ridicules you on a daily basis, you should expect the worst.

So, in a way, the family of Charles IV in Spain and the current president of the United States have at least one thing in common: they're not very good at choosing those who paint their portraits. Whether on canvas with oil or at a podium with words, these portraits are amusing to the audience, but less so to the subjects themselves. I say they got what they paid for.

I think you made an excellent comparison of King Charles' family to our own globally ridiculed president and 1st family. Well done!