[aka Undirected Blog One] 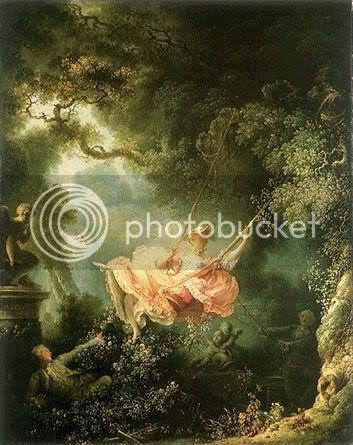 After seeing The Swing by Jean-Honore Fragonard (above) for the first time during Wednesday's lecture, and failing to see both the swing and the woman that are the focal point of the painting, I googled it. When that same painting came up on my computer screen, I instantly saw both woman and swing. Staring at this, I wondered how I could have possibly mistaken this woman in her frilly dress for a bearded, white haired Tarzan figure. I'll blame this on the projected image seen at school, and move on.

According to Cynthia, this painting is 18th century Pornography. Failing to see how this ordinary scene of a man waving his hat at a swinging aged Tarzan (later revealed to be a young woman) could possibly be considered pornography, I was reminded of those optical illusions which change their subject matter depending on how you focus your eyes (and sometimes mind), like the old woman/young woman image (below).

Look at it one way, and its an older woman with an unusually large nose. Glance at it again, and the picture's changed to show a young lady in a large hat looking away. Perhaps Fragonard's intention when creating The Swing was to make pornography with a twist: viewed one way its a romance between a young woman and her mysterious lover; in another glance it seems to show Tarzan's never ending love for the jungle.